Not Setting A Plan B 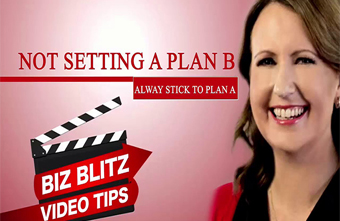 We’ve all been led to believe that having a Plan B is one of the wisest decisions you can make for yourself (and your business).

Well, should your Plan A fail at least you have with you a backup plan. Studies suggest that having a Plan B can actually be harmful to your Plan A. You see, when your Plan A fails and you’ve prepared a Plan B then inevitably instead of working on your Plan A and make it succeed you just simply go with Plan B. This only goes to show that your passion and your plan to succeed (Plan A) wasn’t good enough that it has left you to settle with another option (Plan B).

I always tell my coaching clients that when you create a Plan A give it everything you’ve got because when you skip to Plan B it only means you failed in your original idea. Having a Plan A means you’ve thought well and hard about it and you’ve given it a lot of emotion and energy. If it does fail although perhaps temporarily, you’ll find that it would be difficult to replicate that same energy and enthusiasm with your Plan B. We all know where all that can lead to. Yes, you got that right. Disaster.

So let’s assume that your original idea (Plan A) failed, what are you going to do? When your Plan A fails you should not neglect the entire concept and go with Plan B. My suggestion is you look into it, find out what happened, figure out what went wrong and motivate yourself to improve it because believe me, eventually you’ll make that Plan A happen.

Take James Dyson for instance. Before Dyson became famous for his vacuum design he had to go through over five thousand rejected prototypes. He didn’t have a Plan B in mind so he worked through whatever savings he had left just to get his Plan A to succeed. And true enough, it did. After countless adjustments and a great deal of perseverance Sir James Dyson’s Plan A became a huge success. And according to Forbes James Dyson’s estimated worth is said to be $4.5 billion.